Setting Up Windows 10 For The First Time

One day while surfing on the internet looking for a new board game to play, I ran across splendor and it was love from day 1. It is one of the best board games to play, it doesn’t take forever to play and it is a great paced game; meaning you will not be there for hours playing it. I had wished so badly it would come with an app, to my sorrow it did not. Fast forward a few months later and bam there is now a splendor app on the android! Let me give you a bit of a background on splendor. Splendor is an addictive strategy turn-based card game, where players assume the role of wealthy Renaissance merchants, exploiting mines and caravans, hiring craftsmen and leveraging their influence with the nobility. The main goal is to get to 15 points first.  Now on to the app itself! That is just a brief overview of the game.

It is also on the ITunes app store as well, both cost $6.99 and I just knew I had to buy it! So far it has been one of the best decisions I have ever made! The app is just like the real game, except your playing against an AI instead of people. Which I was rather disappointed by. However, the game over all is a great game. The AI is rather good and will beat you many times; I have still yet to win a game against it. Most games on average take about 15-20 minutes to play, yet while you are playing the game, it does not feel like that at all. 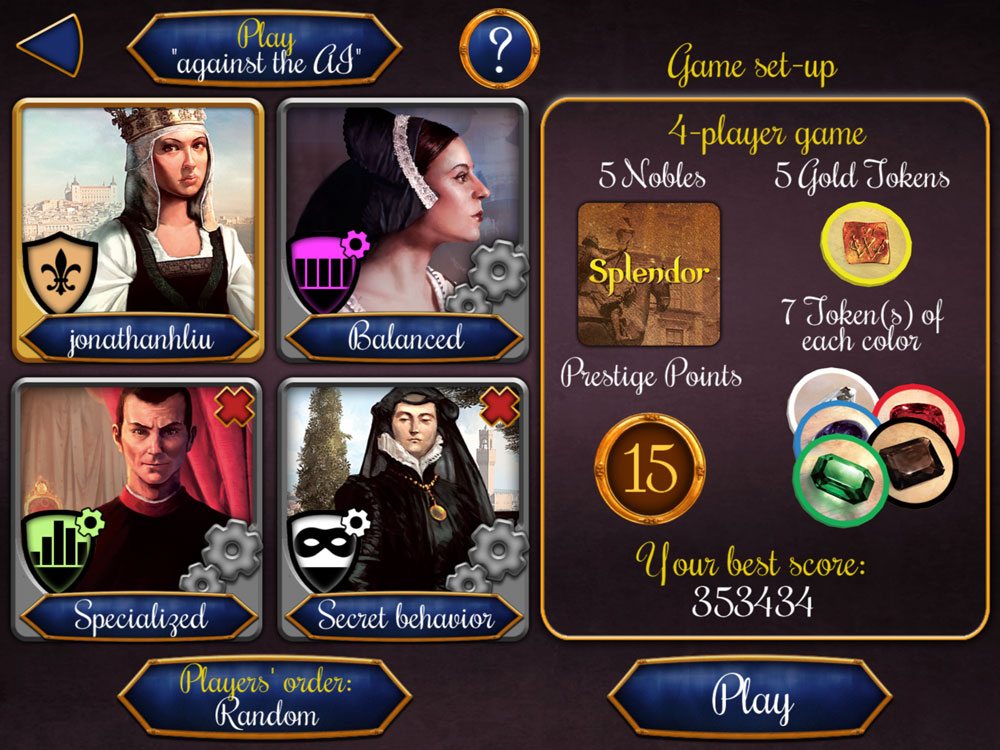 You can play against 3 other AI players, you can then set random order or fixed order making yourself first. If you are new to the game, you can learn how to play it as well.  You can also select your character and emblem, which to me personally is a nicely added feature. The game also offers 4 different game modes, which they explain nicely, and I am not going to go into just because they already to such a great job of it. Also to get an idea of the game-play just check out the video a bit further down.

Over all this app is really great, if you love splendor and already played it, and you are a fan I would recommend this without a doubt. Even if your picking it for the very first time, this game is really well done, if you like board games on your phone or tablet I say go for it. The price is  a bit steep, but I can see why they chose the price that they did. The game is beautifully done and hopefully will on the next update they will have the multiplayer updates that they are missing.

Some features of the app:

• Official adaptation of the board game created by Space Cowboys.
• Fast and easy to learn, yet hard to master.
• Lavish graphics, true to the original game.
• Solo mode and pass-and-play mode, 2 to 4 players.
• New game mode: scenario-based “Challenges” to learn advanced techniques or just have fun with rules tweaks. Historically-accurate background stories for Challenges set in the 15th to 16th century period.
• Multiple types of Artificial Intelligence, based on unique strategy behaviors instead of difficulty.
• Excellent interactive tutorial to teach the game and digital interface.
• Achievements board.
• Worldwide leaderboards by connecting with a Days of Wonder account.
• “Renaissance” graphical and musical ambiance.